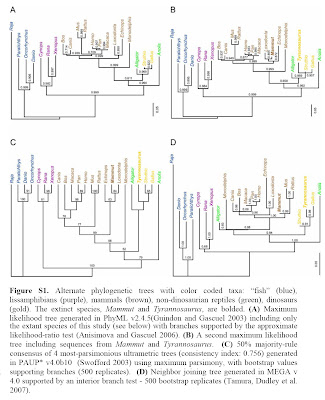 Molecular analysis of a shred of 68-million-year-old Tyrannosaurus rex protein – along with that of 21 modern species – confirms that dinosaurs share common ancestry with chickens, ostriches, and to a lesser extent, alligators. The work represents the first use of molecular data to place a non-avian dinosaur in a phylogenetic tree that traces the evolution of species. The scientists also report that similar analysis of 160,000- to 600,000-year-old collagen protein sequences derived from mastodon bone establishes a close phylogenetic relationship between that extinct species and modern elephants.