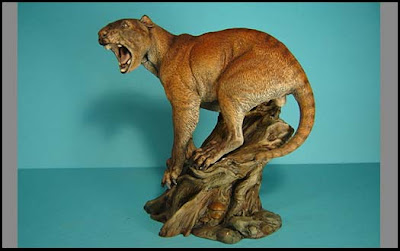 image
Abstract: Few species have generated more or longer running controversy than Australia's extinct marsupial lion Thylacoleo carnifex (Owen, 1859). Over the last century and a half, feeding behaviours as disparate as osteophagy and specialized herbivory have been suggested and T. carnifex has been placed in both phalangeriform and vombatiform clades.

Phylogenetic placement remains uncertain, but broad consensus has been achieved regarding diet, with all recent authors agreeing that T. carnifex was a carnivore. However, the marsupial lion's extraordinary cranial and dental morphologies remain without clear analogy, leaving many questions unanswered regarding how this most atypical mammalian predator killed its prey.

Here I apply a rapidly emerging new approach in comparative biology, finite-element analysis, to the examination of cranial mechanics in T. carnifex. Comparisons are made with an extant lion Panthera leo (Linnaeus, 1758) under simulations designed to model stress distributions imposed by biting (intrinsic loads) and interaction with struggling prey (extrinsic loads).

Modelling that approximates the 3-D architecture of jaw adductors suggests that both the placental and marsupial lions could generate considerably greater bite forces than has been predicted using 2-D approaches, but with relatively greater forces in the marsupial. The distribution of cranial stress is in many respects similar in both species, but results from simulations of extrinsic forces suggest that the marsupial was particularly well adapted to resist the high stresses that would be expected in dealings with relatively large prey.

On the other hand, relatively high stress recorded in the rostrum of T. carnifex under intrinsic loadings suggests that it may have deployed a very different modus operandi, wherein the carnassial teeth played an active role in effecting a kill.