Dr. Eric Snively was recently in Warsaw on a research trip and filed this report for the Palaeoblog. All the photos and text are by Eric. Enjoy!

North American palaeontologists are rarely able to visit the Institute of Paleobiology in Warsaw and associated exhibits at the Museum of Evolution, which harbor specimens collected during the Polish-Mongolian expeditions in the 1960s and 1970s. The expeditions are familiar to most of us through scientific and secondary descriptions of collected dinosaurs, and were led by the great Zofia Kielan-Jawoworska and detailed in her book Hunting for Dinosaurs. Despite a creationist-tinged contemporary government, Poland has a grand and still extraordinarily vital tradition in geology and palaeontology. On a recent visit to photograph Cretaceous lizards, I took general photographs that may be of interest to Palaeoblog readers. Thanks to Madgelena Borsuk-Bialynika and Karol Sabath for scientific guidance and hospitality. 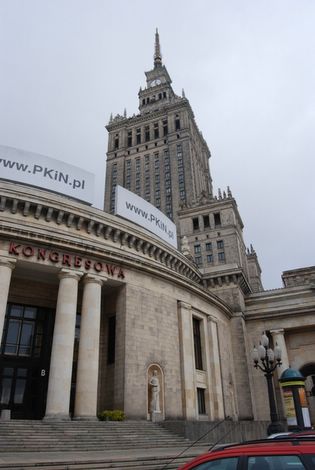 The picture above depicts the Palace of Culture and Science in Warsaw (the city's tallest building), a gift from Joseph Stalin. It contains the Museum of Evolution (with paleo exhibits from ZPAL), subtly shouting "Dear AMNH: Take THIS to your grave!! Love, J.S." The Institute of Palaeobiology is in a nearby building. 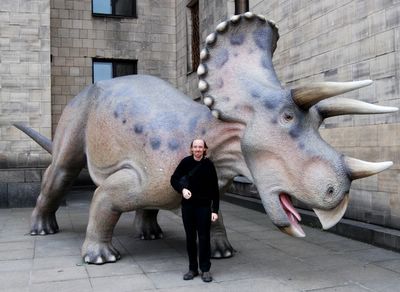 The Museum of Evolution itself is in one of the four integrated buildings around the tower. It's guarded by the Triceratops sculpture above, with me (5'8'') on a cool windy day for scale. According to Karol Sabath there is an (*ahem*) healthy competition between dinosaur sculpture parks in Poland, with rivalry driving up the accuracy of respective artwork. 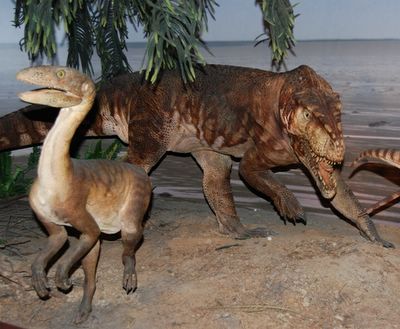 Marta Szubert is the main sculptor for the museums of evolution and geology in Warsaw, and has done everything from fake taxidermy mounts of Smilodon, coccolithophores, working volcano models, Lucy the austalopithcine, karst caverns, to a full conodont apparatus. Her sculptures of Teratosaurus (now known from excellent material in Krasiejow) and Silesaurus are in the photograph above. 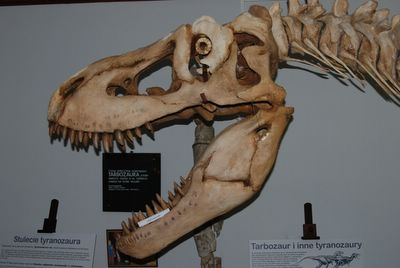 Karol Sabath is in charge of exhibits at the Museum of Evolution. He (and the same versatile sculptor) are mounting the large Tarbosaurus that he and Jorn Hurum recently described, seen in the next picture above. The scale on the lower jaw is about 15 cm. 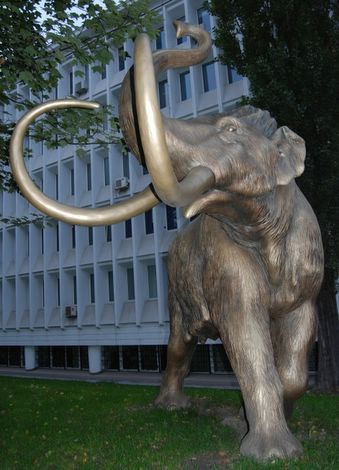 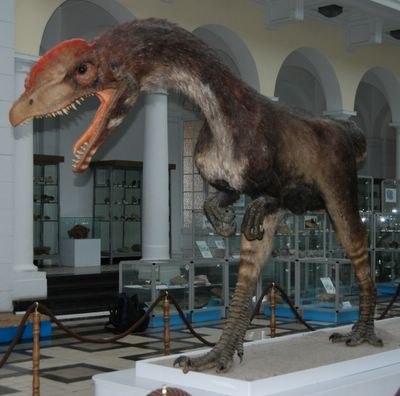 Karol also does exhibits at the Museum of Geology, part of the Institute of Geology in the southern part of town. This is somewhat difficult to find, so at the intersection of the museum's street and that from the metro they have a life-sized mammoth sculpture to show the way. Among the museum's exhibits is a provocatively feathered sculpture of Dilophosaurus.
Posted by Michael J. Ryan, Ph.D. at 8:53 AM