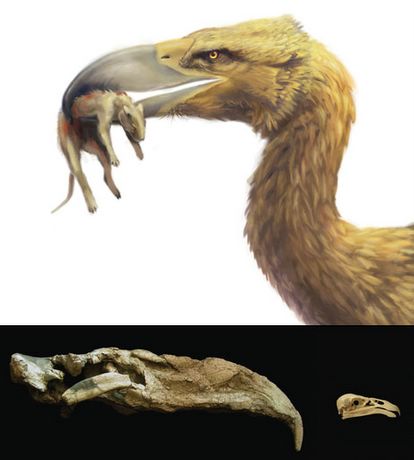 Artist's rendering of a new species of phorusrhacid ("terror bird"). The fossil skull of the new specimen—seen in the bottom photo alongside a modern California condor--represents the largest bird skull ever found. Skull photos by S. Bertelli; illo by S. Abramowicz.

The new species of phorusrhacid is by far the largest terror bird yet, says paleontologist Luis Chiappe, director of the Dinosaur Institute at the Natural History Museum of Los Angeles County, California.

"Some of these birds had skulls that were almost a meter in length. [They] were colossal animals," he said.

The new, currently unnamed species stood about three meters tall and had a head as big as that of a horse.

The bird's most striking feature—literally—was its giant nose, a 46 cm beak with a sharp, curving hook shaped like an eagle's beak.

Terror birds were first discovered in the late 1800s and are believed to have become South America's top predators after the dinosaurs died off 65 million years ago. Chiappe and his colleagues examined the specimens and found that the fossils—a well-preserved skull and foot bones—are about 15 million years.

"We also have some of the foot bones [from] the same animal, which is great, because it allows us to make inferences about the speed of this animal."

Scientists have unearthed many examples of smaller phorusrhacid species that grew between 60 to 90 cm tall. But examples of the largest species, which like many ancient top predators lived in relatively small numbers, have been scarce.
Posted by Michael J. Ryan, Ph.D. at 8:59 AM