Norwegian scientists have discovered a "treasure trove" of fossils belonging to giant sea reptiles that roamed the seas at the time of the dinosaurs. The 150 million-year-old fossils were uncovered on the Arctic island chain of Svalbard - about halfway between the Norwegian mainland and the North Pole. 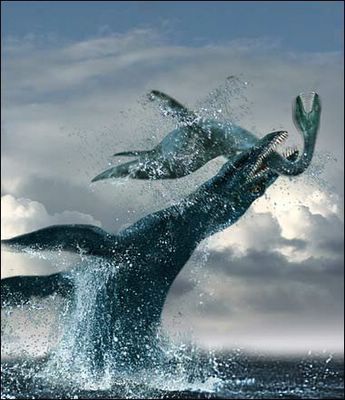 The finds belong to two groups of extinct marine reptiles - the plesiosaurs and the ichthyosaurs. One skeleton has been nicknamed The Monster because of its enormous size.

Palaeontologists from the University of Oslo's Natural History Museum discovered the fossils during fieldwork in a remote part of Spitsbergen, the largest island in the Svalbard archipelago.

"You can't walk for more than 100m without finding a skeleton. That's amazing anywhere in the world," Hurum told BBC News. 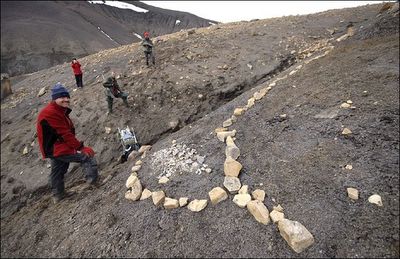 Jørn & crew at work
The skeleton is not yet fully excavated, but its skull is about 3m long, suggesting the body could be more than 8m from the tip of its nose to its tail. "What's amazing here is that it looks like we have a complete skeleton. No other complete pliosaur skeletons are known anywhere in the world," said Dr Hurum.

The researchers even found evidence of an attack on one of the creatures. An ichthyosaur tooth is embedded in a neck vertebra from one plesiosaur belonging to the genus Kimmerosaurus.

The Svalbard excavation was led by Dr Hurum and Hans Arne Nakrem, also of Oslo's Natural History Museum. The museum plans to return to the field site in the summer of 2007 to resume excavations.
Posted by Michael J. Ryan, Ph.D. at 5:18 PM