The bear that left a 3-foot-long claw mark in an Ice Age clay bank was the largest bear species ever to walk the Earth, about 6 feet tall at the shoulder and capable of moving its 1,800 pounds up to 45 mph in a snarling dash for prey. 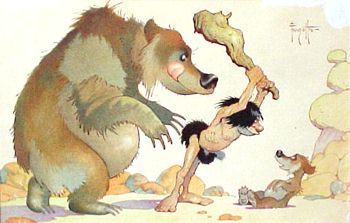 Art © Frank Frazetta from HERE.
From the Cleveland Plain Dealer:

The claw mark by the extinct giant short-faced bear still looks fresh today in a southwest Missouri cave that some scientists are calling a national treasure - an Ice Age time capsule sealed for thousands of years.

Riverbluff Cave, discovered accidentally five years ago on the outskirts of Springfield, is slowly yielding its fossil treasures as a small team of scientists and volunteers gingerly explores it while trying to preserve a rich bed of remains, from bones to tracks and dung.