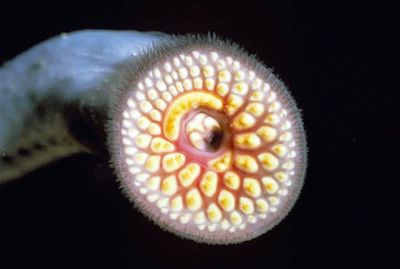 Modern lampreys, such as the fish pictured above, haven't changed much from their ancient ancestors, according to a new study of a 360-million-year-old fossil. Photo USFWS.

Abstract: Lampreys are the most scientifically accessible of the remaining jawless vertebrates, but their evolutionary history is obscure. In contrast to the rich fossil record of armoured jawless fishes, all of which date from the Devonian period and earlier, only two Palaeozoic lampreys have been recorded, both from the Carboniferous period. In addition to these, the recent report of an exquisitely preserved Lower Cretaceous example demonstrates that anatomically modern lampreys were present by the late Mesozoic era.

Here we report a marine/estuarine fossil lamprey from the Famennian (Late Devonian) of South Africa, the identity of

This small agnathan, Priscomyzon riniensis gen. et sp. nov., is not only more conventionally lamprey-like than other Palaeozoic examples, but is also some 35 million years older. This finding is evidence that agnathans close to modern lampreys had evolved before the end of the Devonian period. In this light, lampreys as a whole appear all the more remarkable: ancient specialists that have persisted as such and survived a subsequent 360 million years.