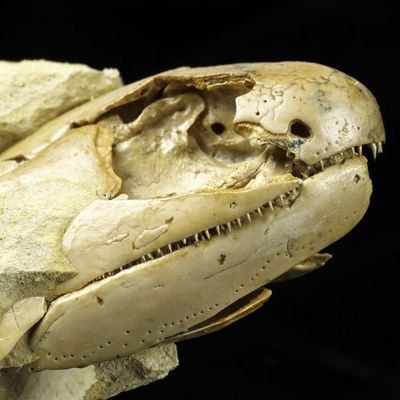 Gogonasus, a fish that swam on an ancient barrier reef in Australia 380 million years ago had fins and nostrils remarkably similar to the limbs and ears of the first four-limbed creatures to walk on land, according to a new study.

The new finding suggests that certain aspects of tetrapod ears and limbs can be traced much further back in "fishy looking" fish than had been previously known, says John Long, head of sciences at Museum Victoria in Melbourne, Australia.

Previously the lobed-finned fish—which was about 12 inches (30 centimeters) long and covered in diamond-shaped scales—was known only from crushed or fragmented fossil remains. But the new specimen, discovered last year in Western Australia, is nearly complete, with an almost intact skull, body, and fin bones.

"In simple terms, Gogonasus is a missing link between fishes that look like fish and the more amphibian-like elpistosteglians [tetrapod-like fishes such as Tiktaalik]," Long said.
Posted by Michael J. Ryan, Ph.D. at 10:12 PM