From the Jacksonville Daily News:

Dale Russell, an N.C. State paleontologist and N.C. Museum of Natural Sciences dinosaur research coordinator, along with fellow museum specialists Walt Sturgeon and Becky Browning spent most of Tuesday searching the piles of refuse for the 12-foot, 475-pound alligator killed early last week when it was struck by a vehicle on U.S. 17 outside Jacksonville. The gator, estimated by state wildlife officials to be 85 years old, was killed Sept. 25.

“I read (the story) in the newspaper last week and thought, ‘Boy, that’s a big alligator,'" Russell (right) said. He was subsequently contacted by Indiana-Purdue 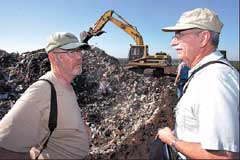 University professor James Farlow, who is conducting research on the physiology of crocodilians and crocodile-like animals.

“Because of the animal’s large size and northerly occurrence, he very much (wanted) to examine a thigh bone of the specimen microscopically for evidence of its growth and general condition,” said Russell. “He contacted me and told me to see if I could get a crew from the museum to come down here.”

“We want to know about the prehistory of North Carolina, and we’re interested in the Ice Age fauna here,” said Russell. “We’re going to study the growth rate, environment and diet of this alligator from its bones to compare it with Ice Age alligators that lived here before. We’d like to get some extremities — teeth, pieces of bones from the body… We’ll rebury the body after we take the samples.”

As time continued to pass with no gator in sight, hopes of a successful recovery soon began to fade. At 2:30 p.m. — after two additional hours were allotted by Horne to continue with the search — workers stopped searching. Russell, Sturgeon and Browning were left empty-handed.
Posted by Michael J. Ryan, Ph.D. at 4:28 PM