A trail of 13 fossilized footprints running through a valley in a desert in northern Mexico could be among the oldest in the Americas, Mexican archeologists said. 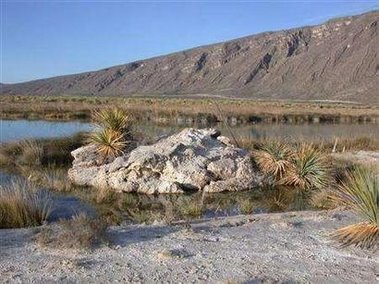 The footprints were made by hunter gatherers who are believed to have lived thousands of years ago in the Coahuila valley (photo) of Cuatro Cienegas, 190 miles (306 kms) south of Eagle Pass, Texas, said archaeologist Yuri de la Rosa Gutierrez of Mexico's National Institute of Anthropology and History.

The age of the Mexican footprints is dwarfed by those found in Africa. The oldest known hominid foot marks are in Laetoli, in Tanzania, and are believed to have been made 3.5 million years ago.
Photo from Reuters
Posted by Michael J. Ryan, Ph.D. at 8:46 AM