Today’s Globe and Mail as a long piece on Australian palaeontologist Tim Flannery who is touring Canada promoting his new book, “The Weather Makers”. Here's a bit of the story:

The Weather Makers is 35 brief chapters written for the layman without stinting on the science,

outlining the history and likely future of man-made changes to the Earth's climate. Flannery's particular focus is the effects of carbon-dioxide emissions on the atmosphere, "the great aerial ocean."

If the force of his argument, based on the most recent available science, leaves us depressed at our likely fate, he is by nature an optimist, so the book is leavened throughout with notions of what we might do to help avert disaster and has an action checklist at the end.

Still, he allows that the subject can be depressing. Trained as a paleontologist, Flannery is an evolutionary biologist by profession, so he'd never before done a comprehensive study of climate science. "I went through a period of unnatural pessimism for me. It was difficult to get out of bed in the morning, for about 12 months, as I was researching the book." 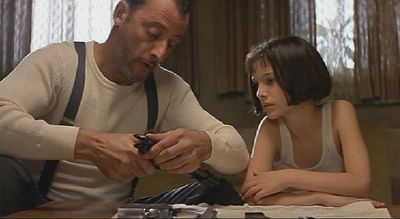 Still, Flannery, 50, has rings under his eyes and a little extra flesh on his frame and a some-time hangdog expression that make him look like the lonely hit man played by Jean Reno in The Professional [above], the one who takes a waifish Natalie Portman under his wing until he dies in a hail of police bullets [That's straight from the article folks! We don't make that kind of thing up here at the palaeoblog.]
Posted by Michael J. Ryan, Ph.D. at 7:07 PM