Completely under the radar, the Canadian Museum of Nature has posted a wonderful and highly informative series of animations of one of the dinsoaurs I co-described, Chasmosaurus irvinensis, HERE.

"Here at Nature we have a special camera that can scan objects and make three-dimensional images of them. 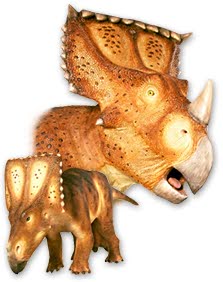 The images can then be used in such a variety of ways that the possibilities seem almost limitless. We've begun by exploring scientific hypotheses while having some fun!

Our main subject has been Chasmosaurus irvinensis, a dinosaur that lived 65 million years ago in what is now Alberta. Researchers at the CMN identified the species in 2001. This specimen is the holotype, which is the specimen upon which all future identification of other specimens is based, and it is held in our collections. You'll also see life-sized, fleshed out models of this dinosaur at our museum. These models were based on the holotype."

You can watch a series of animations of this dino walking around based upon laser scans of the individual bones of the skeleton which were then reassembled and fleshed out digitally.

You can also manipulate a 3D model of the foot based on scans of the original bones.
Posted by Michael J. Ryan, Ph.D. at 12:26 AM