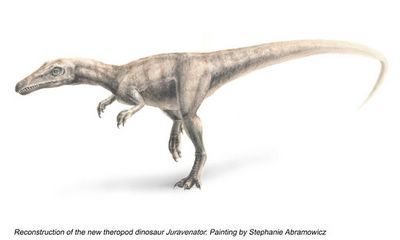 Abstract: Small Late Jurassic theropod dinosaurs are rare worldwide. In Europe these carnivorous dinosaurs are represented primarily by only two skeletons of Compsognathus, neither of which is well preserved. Here we describe a small new theropod dinosaur from the Late Jurassic period of Schamhaupten in southern Germany. Being exquisitely preserved and complete from the snout to the distal third of the tail, the new fossil is the best-preserved predatory, non-avian dinosaur in Europe. It possesses a suite of characters that support its identification as a basal coelurosaur. A cladistic analysis indicates that the new taxon is closer to maniraptorans than to tyrannosauroids, grouping it with taxa often considered to be compsognathids. Large portions of integument are preserved along its tail. The absence of feathers or feather-like structures in a fossil phylogenetically nested within feathered theropods indicates that the evolution of these integumentary structures might be more complex than previously thought.

A 150 million-year-old fossil from southern Germany has paleontologists ruffled over how feathers arose in the line of dinosaurs that eventually produced birds.

From the Houston Chronicle comes this article:

The fossil is a juvenile carnivorous dinosaur about 2 1/2 feet long that paleontologists have named Juravenator for the Jura mountains in southern Germany where it was found. 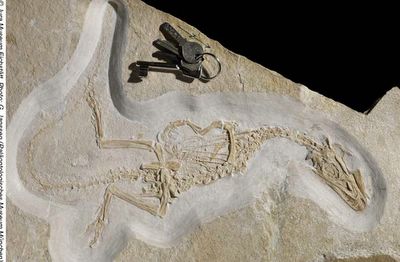 The fossil's exceptionally well-preserved bone structure clearly puts it among feathered kin on the dinosaur family tree. Because all of its close relatives are feathered, paleontologists would expect Juravenator to follow suit.

But a small patch of skin on Juravenator's tail shows no sign of feathers. And the skin also doesn't have the follicles that are typical of feathered dinosaurs, said Luis Chiappe, director of the Dinosaur Institute at the Natural History Museum of Los Angeles County. He and Ursula B. Gohlich of the University of Munich describe the fossil in Thursday's issue of the journal Nature.

"It has a typical scaly dinosaurian skin," Chiappe said.
The paleontologists believe Juravenator's closest known relative may have been a fully feathered dinosaur from China, Sinosauropterix.