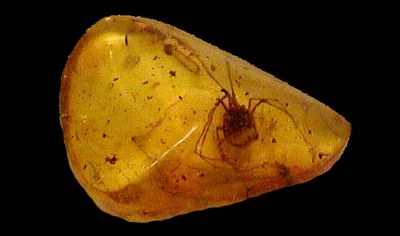 Spider from HERE(not the new species).

A 75-million-year-old spider found in amber near Lethbridge has been named after Alberta. The spider, measuring only about one millimetre long, was found in the 1970s preserved in a piece of amber.

It was stored in a collection of fossils at the Royal Tyrrell Museum in Drumheller and examined in 2003 by visiting scientist David Penny of the University of Manchester, England.

The scientist determined it was a unique specimen and named in Orchestina albertensis, after the province. It is the first fossilized spider species to be identified based on a specimen from Alberta.

The new fossil species belongs to the family Oonopidae, which contains about 450 living species of small-bodied, fast-moving and nocturnal hunters. This is the first record of the family Oonopidae in Canada. Fossils of this family have also been found in New York, the Dominican Republic, Africa, Asia and Europe. No living species of this family are found in Canada, with the closest occurrences in the southern and eastern USA.

The Order Araneae, or spiders, contains approximately 40,000 living species. Spiders have a lengthy fossil record dating back 390 million years to the Middle Devonian, before the appearance of the first amphibians.

Thanks to the Digital Dream Machine Blog for this news!
Posted by Michael J. Ryan, Ph.D. at 12:05 PM