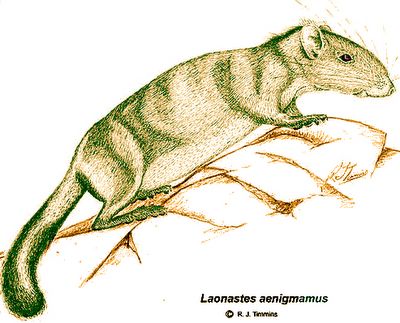 Abstract: The living Laotian rodent Laonastes aenigmamus, first described in early 2005, has been interpreted as the sole member of the new family Laonastidae on the basis of its distinctive morphology and apparent phylogenetic isolation from other living rodents. Here we show that Laonastes is actually a surviving member of the otherwise extinct rodent family Diatomyidae, known from early Oligocene to late Miocene sites in Pakistan, India, Thailand, China, and Japan. Laonastesis a particularly striking example of the "Lazarus effect" in Recent mammals, whereby a taxon that was formerly thought to be extinct is rediscovered in the extant biota, in this case after a temporal gap of roughly 11 million years.

From the article at LiveScience.com byBjorn Carey:

"It is an amazing discovery and it's the coelacanth of rodents," said Dr. Mary Dawson. "It's the first time in the study of mammals that scientists have found a living fossil of a group that's thought to be extinct for roughly 11 million years. That's quite a gap. Previous mammals had a gap of only a few thousand to just over a million years." Laonastes is currently in the process of being officially reclassified in the Diatomyidae family.

Diatomyidae were squirrel-sized rodents that lived during the middle Tertiary period 34 million to 11 million years ago in southern Asia, central China, and Japan. They also had highly characteristic molar teeth and jaw structure, which is how the researchers reclassified Laonastes. 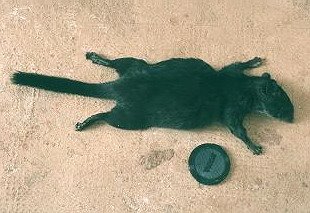 Image of Laonastes from HERE.

"It looks like possibly one of the things that's been changing in family is improved cutting of vegetation," Dawson told LiveScience. "But over 11 million years you'd expect some differences in the structures."

Western scientists still haven't seen a living Laonastes specimen, which will be critical in conserving what may be a threatened species. "Biologists need to get out there and find some living ones," Dawson said. Finding living specimens and understanding how they live could be key to determining why the rodents moved from central Asia into the Indian subcontinent.
Posted by Michael J. Ryan, Ph.D. at 10:17 AM