Salamanders and the tuatara, a lizard-like animal that has lived on Earth for 225 million years, were the first vertebrates to walk and run on land.

“Tuataras (above) are the oldest living models of early tetrapods (four-legged animals) still alive today; that’s what makes them so interesting,” Reilly said.

After studying the creatures at the Toledo Zoo, Stephen Reilly and Eric McElroy determined that they use both forms of locomotion, which are energy-saving mechanisms generally believed to be important only in fast-running animals such as mammals and birds.

Force data used to study the movement of these creatures’ center of mass showed the telltale vault and dip of center of mass movements in different strides – confirmation that the creatures mechanically walk and run. Because they are the oldest living examples of four-legged animals, the new findings suggest that both energy saving mechanisms appeared when the first vertebrates moved onto land, 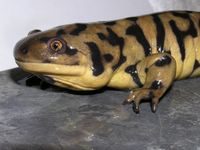 Reilly explained. In comparison to previous research on other vertebrates, this also suggests that all terrestrial vertebrates – except for turtles, which are limited by their shell – can walk and run.

The researchers also showed, however, that walking and running in tuataras occur at the same speed and use about the same amounts of energy. Reilly believes that this could be a pre-adaptation in these primitive animals that have not evolved the need for speed, unlike other animals.

The research also shows for the first time a clear difference in locomotor mechanics between “lumbering” animals with clumsy, ungraceful gaits and “cursorial” animals that move fast and smoothly. In lumbering animals, up and down movements dominate the mechanical energy of locomotion. These movements are smoothed out in cursorial animals such as in dogs and horses, where more energy is shifted to forward movement, and the center of mass oscillates relatively less with each step.
Posted by Michael J. Ryan, Ph.D. at 11:21 AM