Wednesday, March 15 at 7 pm, as part of the Curator’s Forum at the Cleveland Museum of Natural History, Dr. Michael Ryan, Curator of Vertebrate Paleontology, presents a talk entitled:

“101 Years of Tyrannosaurus rex: The Evolution of an Icon” 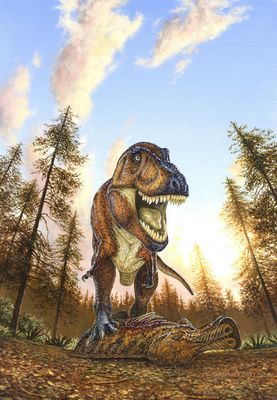 Tyrannosaurus rex is arguably the most famous dinosaur ever discovered. First described by Henry Fairfield Osborn in 1905, it quickly caught the public's attention. More recently, the discovery and controversy surrounding the spectacular specimen "Sue" gave T. rex "dino diva" status. Dr. Michael Ryan traces T. rex's fascinating story, from its initial discovery to its present top spot in the popular imagination, by examining its evolution in the realms of science and pop-culture. Learn why T. rex is the "Tyrant King" of all dinosaurs!

Like the above image? It's the cover from "T. Rex: Hunter or Scavenger?" illustrated by Mike Skrepnick.
Posted by Michael J. Ryan, Ph.D. at 1:18 PM