Comparing amber fossil assemblages across the Cenozoic. 2006, David Penney, and A. Mark Langan.

Scientists have carried out the first comparative scientific study of ancient spiders trapped in amber more than 30 millions years ago. 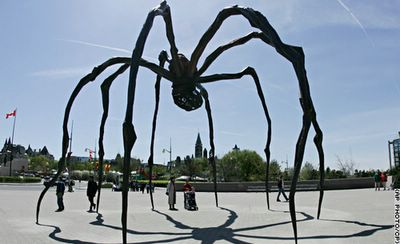 The study of fossilised spiders from the Baltic (Poland) and the Dominican (Caribbean) regions has revealed new insights into the ecologies of spiders dating back to the Cenozoic period.

671 species of spiders were compared in the study of ancient spiders from different parts of the world. Dr David Penney analysed the size distributions of the spiders and comparing the distinct hunting traits of each species. He found that web-spinning spiders were bigger in Baltic amber than in Dominican amber, but that there was no difference between hunting spiders in either region. It was also found the fauna of the amber producing trees in each region accounted for this difference in size.

"Several lines of evidence show that greater structural complexity of Baltic compared to Dominican amber trees explains the presence of larger web-spinners. The Dominican trees are long, thin and smooth whereas the Baltic trees are wide and bushy, providing a much better environment for web-spinners to prosper," says Dr Penney.
Posted by Michael J. Ryan, Ph.D. at 10:20 PM