The new taxon was recovered from the late Early Cretaceous Xinminpu Group of Yujingzi Basin in northwestern Gansu Province, China, and is represented by a series of eight mid-cervical vertebrae, a right pelvic girdle and some unidentified bones. 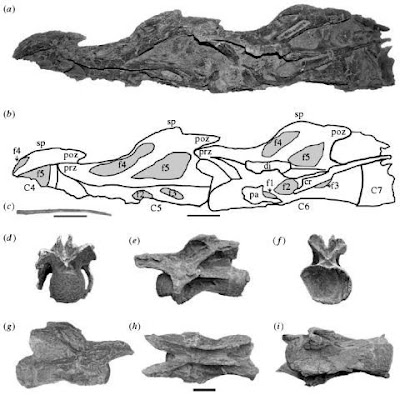 The existence of deeply excavated cervical neural spines and a rising transition in the neural spine height among mid-cervical vertebrae clearly show the affinity of Qiaowanlong as a member of brachiosaurids.

Among brachiosaurids, Qiaowanlong shares a derived feature with the North American Early Cretaceous brachiosaurid Sauroposeidon: the lack of cranial centrodiapophyseal lamina. However, Qiaowanlong is unique in possessing a suite of features, such as a low central length/cotyle height ratio, bifurcated cervical neural spines and a much reduced ischium.

The discovery of Qiaowanlong and other new material indicates a diverse and abundant sauropod assemblage in China during the Early Cretaceous.
Posted by Michael J. Ryan, Ph.D. at 6:40 AM