A new investigation of a fossilized tracksite in southern Africa shows how early dinosaurs made on-the-fly adjustments to their movements to cope with slippery and sloping terrain. 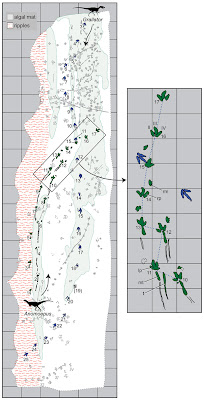 Click to enlarge
The Moyeni tracksite in Lesotho contains more than 250 footprints made by a variety of four-legged animals near the beginning of the Jurassic Period (about 200 million years ago).

When they analyzed the tracks, the researchers determined that ornithischians changed their way of walking as surface conditions changed. In the river bed, they crouched low, adopted a sprawling four-legged stance, and crept along flat-footed, dragging their feet. On the slope, they narrowed their stance, still walking on all fours, but picking up their feet. Once they reached the flat, stable ground on top, they switched to walking on two legs.

In contrast, the theropod that crossed the surface didn't vary its posture or gait. Remaining upright on two legs, it used claws on its toes to grip slippery surfaces.

"It was thought that early in their evolutionary history, they had the capacity to do both, but at Moyeni they were caught in the act, and we can analyze how and perhaps why they did it," Marsicano said.

Theropods, on the other hand, never gave up their two-legged stance. But because their lineage is believed to have given rise to birds, the possibility that their gripping claws played a key role is interesting to consider. link