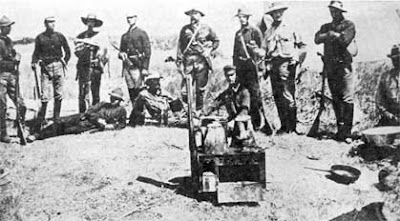 Marsh was an American paleontologist who discovered and described 100’s of new fossil species. He made extensive scientific explorations of the western U.S. and contributed greatly to knowledge of extinct North American vertebrates. Marsh spent only four seasons in the field, between 1870 and 1873.

"The Great Bone Wars," were the result of his rivalry with Edward Drinker Cope, America's other great vertebrate paleontologist of the period. Each scientist hired field crews to unearth and ship back fossils as fast as possible. The rival crews were known to spy on each other, dynamite their own and each other's secret localities (to keep their opponents from digging there), and occasionally steal each other's fossils.
Posted by Michael J. Ryan, Ph.D. at 6:21 PM