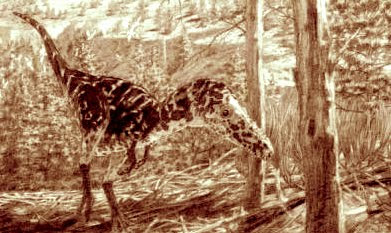 The new specimen and species, A. altai, was found on a 2001 Museum expedition to the Gobi Desert of Mongolia led by Norell and Michael Novacek. In fact, it was found at the same site as a Tarbosaurus fossil. But although its skeleton is anatomically similar to this larger relative, A. altai is half the size; the reconstructed size is about 369 kg. Its teeth are slender, the skull has small and weak muscle attachments, and the skull has a long snout with eight horns that were probably about five inches in length, features never seen in a tyrannosaur before.

CT scans of the braincase show the large air sacks, huge olfactory bulbs, and the small inner ear expected for a tyrannosaur. Analysis of bone microstructure determined that the animal died as a nine year old, essentially a teenager at 85% of its adult size. link
Posted by Michael J. Ryan, Ph.D. at 8:06 AM