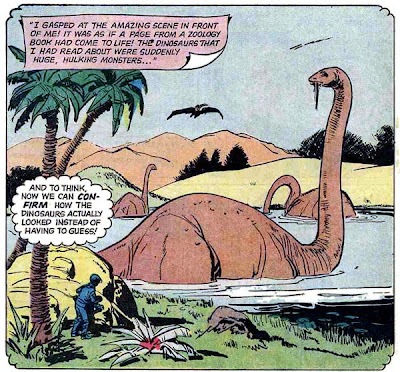 And then we took a blood sample for analysis...
Abstract: Sauropodomorph dinosaurs include the largest land animals to have ever lived, some reaching up to 10 times the mass of an African elephant. Despite their status defining the upper range for body size in land animals, it remains unknown whether sauropodomorphs evolved larger-sized genomes than non-avian theropods, their sister taxon, or whether a relationship exists between genome size and body size in dinosaurs, two questions critical for understanding broad patterns of genome evolution in dinosaurs.

Here we report inferences of genome size for 10 sauropodomorph taxa. The estimates are derived from a Bayesian phylogenetic generalized least squares approach that generates posterior distributions of regression models relating genome size to osteocyte lacunae volume in extant tetrapods. We estimate that the average genome size of sauropodomorphs was 2.02 pg (range of species means: 1.77–2.21 pg), a value in the upper range of extant birds (mean = 1.42 pg, range: 0.97–2.16 pg) and near the average for extant non-avian reptiles (mean = 2.24 pg, range: 1.05–5.44 pg). The results suggest that the variation in size and architecture of genomes in extinct dinosaurs was lower than the variation found in mammals.

A substantial difference in genome size separates the two major clades within dinosaurs, Ornithischia (large genomes) and Saurischia (moderate to small genomes). We find no relationship between body size and estimated genome size in extinct dinosaurs, which suggests that neutral forces did not dominate the evolution of genome size in this group.