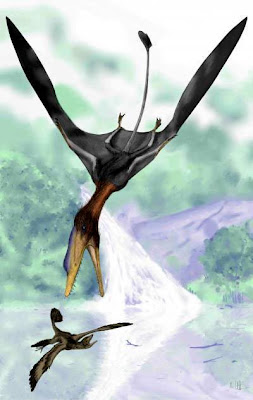 Abstract: The fossil record is a unique source of evidence for important evolutionary phenomena such as transitions between major clades. Frustratingly, relevant fossils are still comparatively rare, most transitions have yet to be documented in detail and the mechanisms that underpin such events, typified by rapid large scale changes and for which microevolutionary processes seem insufficient, are still unclear. 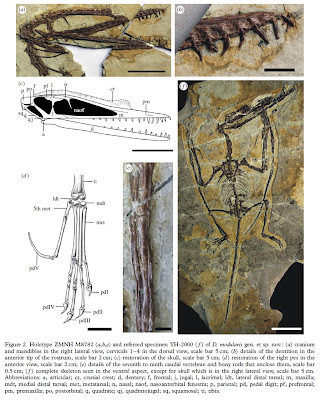 Click to enlarge
Darwinopterus exhibits a remarkable ‘modular’ combination of characters: the skull and neck are typically pterodactyloid, exhibiting numerous derived character states, while the remainder of the skeleton is almost completely plesiomorphic and identical to that of basal pterosaurs. This pattern supports the idea that modules, tightly integrated complexes of characters with discrete, semi-independent and temporally persistent histories, were the principal focus of natural selection and played a leading role in evolutionary transitions.

Read the story at National Geographic News.
Posted by Michael J. Ryan, Ph.D. at 8:32 AM