Killer Algae Killed Off The Dinosaurs

Hypothesis for the role of toxin-producing algae in Phanerozoic mass extinctions based on evidence from the geologic record and modern environments. 2009. J.W. Castle and J.H. Rodgers, Jr. Environmental Geosciences 16: 1-23 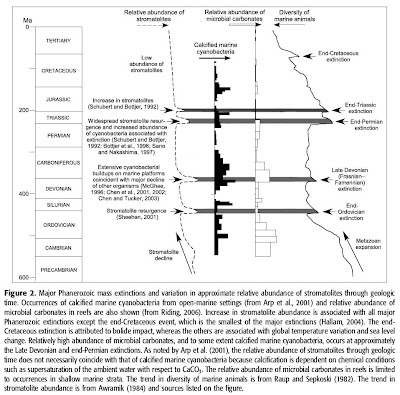 Algae, not asteroids, were the key to the end of the dinosaurs

Today, just about anywhere there is water, there can be toxic algae. The microscopic plants usually exist in small concentrations, but a sudden warming in the water or an injection of dust or sediment from land can trigger a bloom that kills thousands of fish, poisons shellfish, or even humans.

Researchers think the same thing happened during the five largest mass extinctions in Earth's history. Each time a large die off occurred, they found a spike in the number of fossil algae mats called stromatolites strewn around the planet.

Such blue-green algae structures that produce poisons and deplete oxygen were present in sufficient quantities to kill off untold numbers of plants and animals living on land or in the sea.

Other researchers have theorized that climate changes, sea level, volcanic activity, even asteroids were primary causes for deaths of more than 50 percent of life on Earth. Castle and Rodgers claim that these causes are contributors, but algae were the mass killer. They point out that asteroid-caused extinction, a popular theory for the end of dinosaurs, does not fit the evidence.

"The fossil record indicates that mass extinctions ... occurred in response to environmental changes at the end of the Cretaceous; however, these extinctions occurred more gradually than expected if caused solely by a catastrophic event." link and link
Posted by Michael J. Ryan, Ph.D. at 8:28 AM