This Day In History: Crystal Palace Burns Down 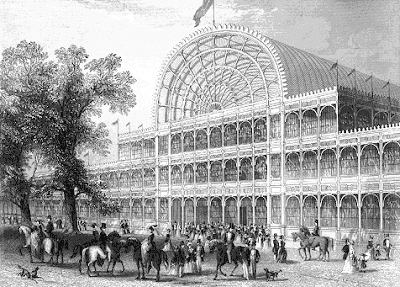 link
From Today In Science History:

In 1936, London's famed Crystal Palace, constructed for the International Exhibition of 1851, was destroyed in the most spectacular fire seen in Britain for many years. It started about 8 pm and spread with such amazing rapidity that within half an hour the great building was ablaze from end to end. Flames rose 300-ft despite the efforts of 90 engines and 500 firemen. Only the two towers escaped destruction. When built, constructed mainly of glass and iron, it was nicknamed "The Crystal Palace" by Punch magazine.

In 1854 the sculptor Benjamin Waterhouse Hawkins installed three construct full-size concrete restorations of Iguanodon, Hylaeosaurus, and Megalosaurus on the grounds of Sydenham Park, home of the Crystal Palace.
Posted by Michael J. Ryan, Ph.D. at 1:16 PM