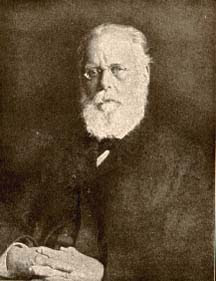 was a German biologist and one of the founders of the science of genetics. He is best known for his opposition to the doctrine of the inheritance of acquired traits and for his "germ plasm" theory, the forerunner of DNA theory.

Weismann conceived the idea, arising out of his early observations on the Hydrozoa, that the germ cells of animals contain "something essential for the species, something which must be carefully preserved and passed on from one generation to another."

Weismann envisioned the hereditary substances from the two parents become mixed together in the fertilized egg and a form of nuclear division in which each daughter nucleus receives only half the original ancestral germ plasms.

More info from Science World. image From Today In Science History
Posted by Michael J. Ryan, Ph.D. at 5:30 AM