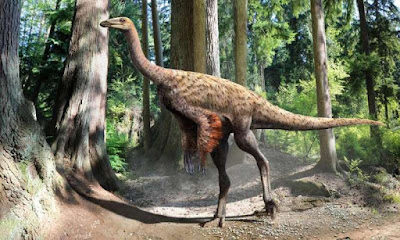 Illo by Julius Csotonyi
The discovery of an Ornithomimus with preserved tail feathers and soft tissue is shedding light on the convergent evolution of these dinosaurs with ostriches relating to thermoregulation.

"We now know what the plumage looked like on the tail, and that from the mid-femur down, it had bare skin," says Aaron van der Reest. This is the first report of such preserved skin forming a web from the femoral shaft to the abdomen, never before seen in non-avian dinosaurs. "Ostriches use bare skin to thermoregulate.

Because the plumage on this specimen is virtually identical to that of an ostrich, we can infer that Ornithomimus was likely doing the same thing, using feathered regions on their body to maintain body temperature. It would've looked a lot like an ostrich." In fact, this group of animals—referred to as ornithomimids—is commonly referred to as "ostrich mimics." Read more at Phys Org.
Posted by Michael J. Ryan, Ph.D. at 11:30 AM