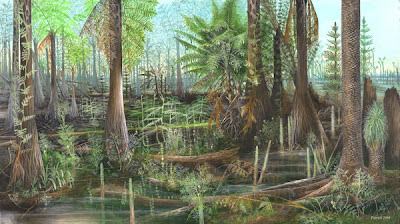 Painting by Mary Parrish
Scott (Nov. 28, 1854 – Jan. 29, 1934) was an English paleobotanist and leading authority of his time on the structure of fossil plants, one of those who laid the foundations of paleobotany. He conducted experiments in the Jodrell Laboratory in Kew Gardens, where he became its honorary keeper (1892-1906). In collaboration with W.C. Williamson, he wrote three papers on fossil-plant morphology (1894-95).

Scott continued writing papers after Williamson's death and in which he described many otherwise unknown fossil plants. He wrote the classic Studies in Fossil Botany, which greatly popularized the subject.
From Today In Science History
Posted by Michael J. Ryan, Ph.D. at 6:04 AM