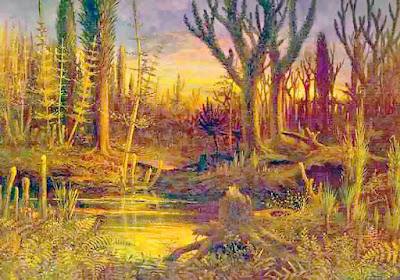 image
Researchers have unearthed an ancient fossil forest with preserved tree stumps dating to 380 million years ago preserved in Svalbard, a Norwegian archipelago in the Arctic Ocean.

The forests grew near the equator during the late Devonian period, and could provide an insight into the cause of a 15-fold reduction in levels of carbon dioxide (CO2) in the atmosphere around that time, thought to be largely caused by a change in vegetation from diminutive plants to the first large forest trees.

The team found that the forests in Svalbard were formed mainly of lycopod trees, better known for growing millions of years later in coal swamps that eventually turned into coal deposits – such as those in South Wales. They also found that the forests were extremely dense, with very small gaps – around 20cm – between each of the trees, which probably reached about 4m high.