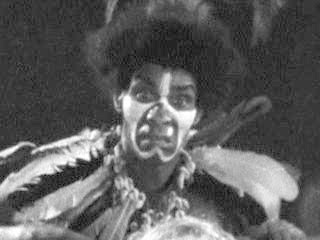 image
Steve Clemente (born Esteban Clemento Morro Nov. 22, 1885—May 7, 1950) was a Mexican actor known for his many villainous roles. He began acting in his teens, signing up for his first movie, The Secret Man, in 1917. His later, numerous roles were usually bit parts and he was an expert knife thrower.

He was a known scene stealer and was famous for his villainous snarl. He later starred in such movies as The Most Dangerous Game (1932), playing Tartar, the second henchman of Count Zarrof and played the Witch King in King Kong (1933). From Wiki
Posted by Michael J. Ryan, Ph.D. at 6:00 AM