What Did A Dinosaur Eat?

Take 200 milligrammes of dried and ground Equisetum, ten millilitres of digestive juice from sheep's rumen, a few minerals, carbonate and water. Fill a big glass syringe with the mix, clamp this into a revolving drum and put the whole thing into an incubator, where the brew can rotate slowly. In this way you obtain the artificial 'dinosaur rumen'. With this apparatus (also used as a 'Menke gas production technique' in assessing food for cows) Dr. Jürgen Hummel from the Bonn Institute of Animal Sciences is investigating which plants giant dinosaurs could have lived off more than 100 million years ago. The largest sauropods dinosaurs' with their 70 to 100 tonnes had a mass of ten full grown elephants or more than 1000 average Germans [insert your own joke here]. 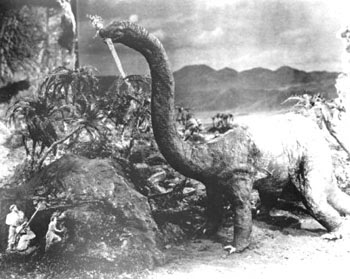 Martin Sander, the coordinator of the research group 'Biology of the Sauropod Dinosaurs: The Evolution of Gigantism' and Hummel assume that the herbivorous dinosaurs must have had a kind of fermenter, similar to the rumen in cows today.' Almost all existing herbivores digest their food by using bacteria in this way.

Norfolk Island pine or ginkgo leaves stand their ground surprisingly well compared to today's flora. 'The difference is not as great as might be expected,' Jürgen Hummel emphasises. The bacteria digest ginkgo even better than foliage, but they seem to prefer Equisetum most. With it gas production is even higher than with some grasses. Nevertheless, equisetum figures in the diet of comparatively few animals. The reason is that in addition to the toxins present in many modern species it wears down animals teeth too much. 'Equisetum contains a lot of silicates,' Jürgen Hummel says. 'It acts like sand paper.'

However, many dinosaurs did not have any molars at all. They just pulled up their food and gulped it down. The mechanical break-up may have been carried out by a 'gastric mill'. Similar to today's birds, dinosaurs may have swallowed stones with which they ground the food to a paste with their muscular stomach. image

This is published in Proceedings of the Royal Society B and should be on-line soon. It would be great if the people writing the press releases would a) tell you the title of the paper, and b) provide a link. Honestly, how do some of these people keep their jobs?!
Posted by Michael J. Ryan, Ph.D. at 6:41 PM