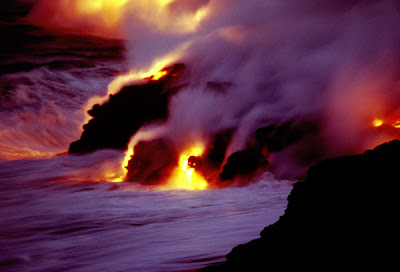 image
From the press release:

Using the genetic equivalent of an ancient thermometer, a team of scientists has determined that the Earth endured a massive cooling period between 500 million and 3.5 billion years ago by using reconstructed proteins from ancient bacteria to measure the Earth’s temperature over the ages.

The team wanted to measure Earth’s temperature billions of years ago to learn more about life on Earth during the Precambrian period. But instead of taking the traditional route — analyzing rock formations or measuring isotopes in fossils — they opted to do what they knew best: protein reconstruction.

“We’ve analyzed the temperature stability of proteins inside organisms that were around during those times,” said Omjoy Ganesh, Ph.D., a structural biologist in the UF College of Medicine’s department of biochemistry and molecular biology. “The ancient oceans were warmer. For ocean organisms living during that time to survive, the proteins within them had to be stable at high temperatures.”

After scanning multiple databases, the scientists struck gold with a protein called elongation factor, which helps bacteria string together amino acids to form other proteins. Each bacterial species has a slightly different form of the protein: Bacteria that live in warmer environments have resilient elongation factors, which can withstand high temperatures without melting. The opposite is true for bacteria that live in cold environments.

Armed with information about when bacterial species evolved, the scientists rebuilt 31 elongation factors from 16 ancient species. By comparing the heat sensitivity of the reconstructed proteins, they were able to discern how Earth’s temperature changed over the ages.

“Remarkably, our results are nearly identical to geologic studies that estimate the temperature trend for the ancient ocean over the same time period. The convergence of results from biology and geology show that Earth’s environment has continuously been changing since life began, and life has adapted appropriately to survive,” Gaucher said.
Posted by Michael J. Ryan, Ph.D. at 12:15 PM