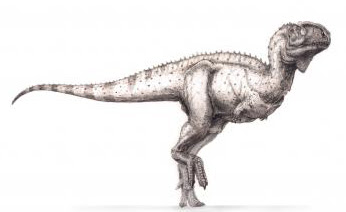 Kryptops
From the press release:

Two new 110 million-year-old dinosaurs unearthed in the Sahara Desert highlight the unusual meat-eaters that prowled southern continents during the Cretaceous Period. Named Kryptops and Eocarcharia the fossils were discovered in 2000. 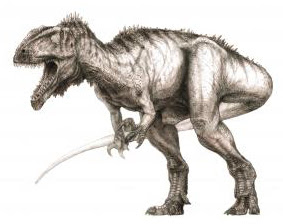 Eocarcharia, reconstructions ©Todd Marshall, courtesy of Project Exploration
A similar-sized contemporary, Eocarcharia dinops, or “fierce-eyed dawn shark,” was so named for its blade-shaped teeth and prominent bony eyebrow. Unlike Kryptops, its teeth were designed for disabling live prey and severing body parts. Eocarcharia and kin (called carcharodontosaurids) gave rise to the largest predators on southern continents, matching or exceeding Tyrannosaurus in size. Eocarcharia’s brow was swollen into a massive band of bone, giving it a menacing glare.

They preyed upon the ground-grubbing, long-necked plant-eater Nigersaurus and lived alongside the enormous extinct crocodilian nicknamed “SuperCroc” (Sarcosuchus). Then, the African continent was part of Gondwana and just beginning to free itself of its land connection to South America.