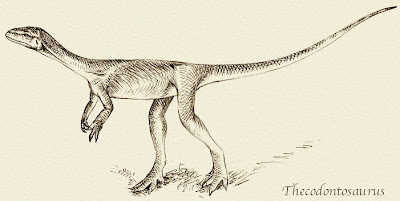 image
From the press release:

The celebrated Bristol, UK, dinosaur, Thecodontosaurus, has now been shown to live on subtropical islands around Bristol, instead of in a desert on the mainland as previously thought. This new research could explain the dinosaur's small size (2 m) in relation to its giant (10 m) mainland equivalent, Plateosaurus. Like many species trapped on small islands, such as the 'hobbit' Homo floresiensis of Flores and pygmy elephants on Malta, the Bristol Dinosaur may have been subjected to island dwarfing.

Geological mapping indicates that the islands were quite small in size and, judging by abundant remains of fossil charcoal, were often swept by fires. Thus the pygmy Bristol Dinosaur may have met its death in a wildfire.

Thecodontosaurus is one of the earliest named dinosaurs. Its bones were originally found near what is now Bristol Zoo in 1834 - some time before dinosaurs were recognised as a group. In 1975, the remains of at least 11 other individual dinosaurs were uncovered in a quarry at Tytherington, north of Bristol.

Microscopic study of marine algae and fossil pollen shows that, rather than inhabiting the arid uplands of the late Triassic Period, the dinosaurs lived just before the Jurassic Period in a series of lushly vegetated islands around Bristol, the outlines of which can still be seen today in the shape of the land.
Posted by Michael J. Ryan, Ph.D. at 2:44 PM