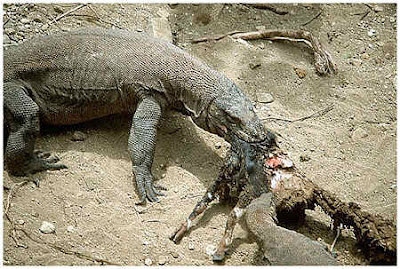 image
Abstract: The early life-history stages of reptiles are extremely important to an individual's fitness, but in an ecological sense, among the most difficult to observe. Here, we used radio-tracking techniques to describe the differences in movement patterns, habitat use and home range between hatchling and juvenile Komodo dragons Varanus komodoensis on Komodo Island, Indonesia.

The movement of hatchlings from their nests was largely linear and suggested a natal dispersal event. The movement patterns of juvenile Komodo dragons exhibited a greater spatial overlap than hatchlings, indicating greater site fidelity and thus use of a more defined activity area. The rates of daily movement were significantly less for hatchlings compared with juvenile dragons. The activity areas of hatchlings were significantly smaller than juvenile dragons. Both age classes preferred utilizing dry monsoon forest compared with other habitat types.

Hatchlings were predominantly arboreal compared with juveniles and the degree of arboreal activity was strongly correlated with an individual's size. These distinct differences in spatial ecology between immature life-history stages suggest that different selection pressures may affect different size classes of Komodo dragons.

Nice to see some empirical data for how young big reptiles differ in habitat use.
Posted by Michael J. Ryan, Ph.D. at 8:52 AM