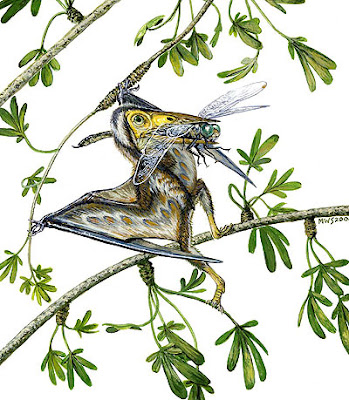 Art by Michael Skrepnick
Abstract: A previously undescribed toothless flying reptile from northeastern China, Nemicolopterus crypticus gen. et sp. nov., was discovered in the lacustrine sediments of the Early Cretaceous Jiufotang Formation, western Liaoning, China. The specimen consists of an almost complete articulated skeleton (IVPP V14377) and, despite representing an immature individual, based on the ossification of the skeleton, it is not a hatchling or newborn, making it one of the smallest pterosaurs known so far (wing span 250 mm).

It can be distinguished from all other pterosaurs by the presence of a short medial nasal process, an inverted "knife-shaped" deltopectoral crest of the humerus, and the presence of a well developed posterior process on the femur above the articulation with the tibia. It further shows the penultimate phalanges of the foot curved in a degree not reported in any pterosaur before, strongly indicating that it had an arboreal lifestyle, more than any other pterodactyloid pterosaur known so far.

It is the sister-group of the Ornithocheiroidea and indicates that derived pterosaurs, including some gigantic forms of the Late Cretaceous with wingspans of >6 m, are closely related to small arboreal toothless creatures that likely were living in the canopies of the ancient forests feeding on insects.
Posted by Michael J. Ryan, Ph.D. at 8:04 AM