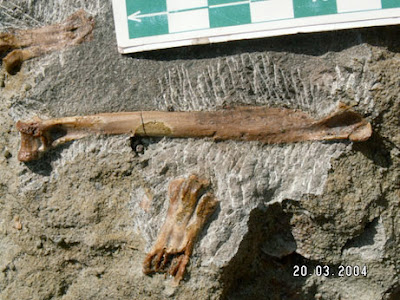 The oldest known bird fossils from New Zealand were recently unearthed along a remote stretch of beach on the Chatham Islands, researchers announced. The fossils represent possibly four new species of seabirds dating back to the late Cretaceous period, around 65 million years ago.

Other remains from the same blocks of fossil-laden sandstone suggest that the birds co-existed with marine and terrestrial dinosaurs. "This is New Zealand's oldest fossil aviary, and it has implications for the origin of modern seabirds," said excavation leader Jeffrey Stilwell of Monash University in Australia.

Stilwell found the fossil trove along a 1.2-mile (2-kilometer) stretch of rugged shoreline on the main Chatham Island, which sits more than 500 miles (800 kilometers) east of Christchurch. Storms had washed sand away from a rocky platform on Maunganui Beach, revealing a wealth of bones from the Cretaceous.
Posted by Michael J. Ryan, Ph.D. at 11:13 AM