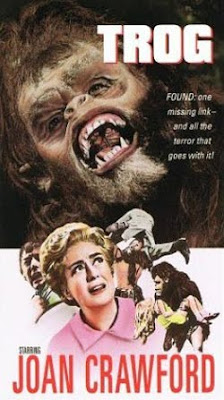 "A sympathetic anthropologist (Joan Crawford!) uses drugs and surgery to try to communicate with a primitive troglodyte found living in a local cave."

Directed in 1970 by Hammer Films veteran, Freddie Francis, this was Crawford's last film. Notable for lifting the dinosaur scenes done by Willis H. O'Brien and Ray Harryhausen for the Irwin Allen-produced film The Animal World.

"After seeing this film, Joan Crawford supposedly joked that if it hadn't been for her end-of-life conversion to Christian Science, she might have committed suicide due to her embarrassment at having been in it." link