A Smaller Ka-Boom! Chicxulub Impact Did Not Cause Deccan Traps 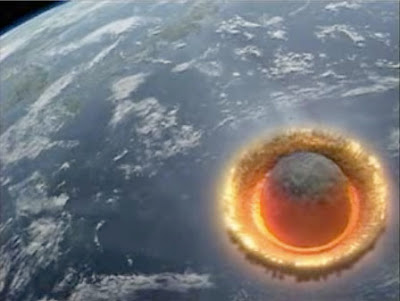 image
Researchers have simulated the meteorite strike that caused the Chicxulub crater in Mexico, an impact 2 million times more powerful than a hydrogen bomb that many scientists believe triggered the mass extinction of the dinosaurs 65 million years ago. The team's rendering of the planet showed that the impact's seismic waves would be scattered and unfocused, resulting in less severe ground displacement, tsunamis, and seismic and volcanic activity than previously theorized.

"We began by asking whether the meteorite that hit the Earth near Chicxulub could be connected to other late-Cretaceous mass-extinction theories. For example, there's a prominent theory that the meteorite triggered huge volcanic eruptions that changed the climate. These eruptions are thought to have originated in the Deccan Traps in India, approximately on the opposite side of the Earth from the Chicxulub crater at the time. Our measurements indicate that a Chicxulub-sized impact alone would be too small to cause such a large volcanic eruption as what occurred at the Deccan Traps.

"But our results go beyond Chicxulub. We can, in principle, now estimate how large a meteorite would have to have been to cause catastrophic events. For instance, we found that if you increase the radius of the Chicxulub meteorite by a factor of five while leaving its velocity and density the same, it would have been large enough to at least fracture rocks on the opposite side of the planet. Our model can be used to estimate the magnitude and effect of other major impacts in Earth's past. link
Posted by Michael J. Ryan, Ph.D. at 1:40 PM