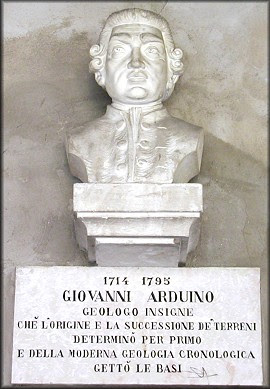 Arduino (Oct. 16, 1714 - March 21, 1795) was an Italian geologist, known as the father of Italian geology, who introduced the terms Primary, Secondary, Tertiary, and Quaternary in 1760 to classify four broad divisions of the Earth's rock surface, each earlier in deposition. Within each he recognized numerous minor strata, and had a clear paleontological interpretation of the age sequence of the fossil record.

The Primary order contained Paleozoic formations from the oldest, lowest basaltic rock from ancient volcanoes overlaid with metamorphic and sedimentary rocks which he saw in the Atesine Alps. He classified Mesozoic prealpine foothills as of the Secondary order, Tertiary in the subalpine hills and the Quaternary alluvial deposits in the plains. From Today In Science History
Posted by Michael J. Ryan, Ph.D. at 7:39 AM