The Origin of Insects

Speleonectes tulumensis is from a group of rare, blind, cave-dwelling crustaceans called remipede and are the crustaceans most closely related to the insects. Credit: Simon Richards

The new study supports the hypothesis that the insects evolved from a group of crustaceans. So flies, honeybees, ants, and crickets all branched off the arthropod family tree from within the lineage that gave rise to today's crabs, shrimp, and lobsters. Another important finding is that the "Chelicerata" (a group that includes the spiders, scorpions, ticks, and mites) branched off very early, earlier than the millipedes, centipedes, crustaceans, and insects. That means that the spiders, for example, are more distantly related to the insects than many researchers previously thought. link 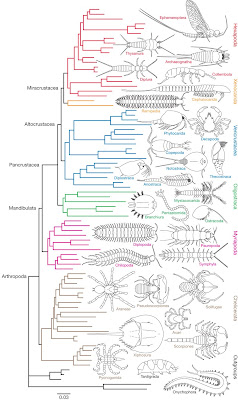 Based on likelihood analyses of 62 nuclear protein-coding genes. Branch lengths are proportional to the amount of inferred sequence change, with the topology and analytical conditions identical to the degen1 analysis in Fig. 1. Line drawings of representatives of the major taxonomic groups show the morphological disparity across Arthropoda. Scale bar, nucleotide changes per site. 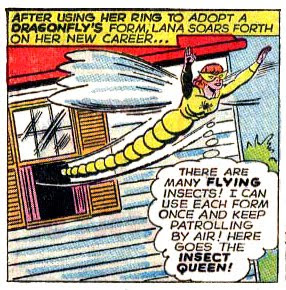