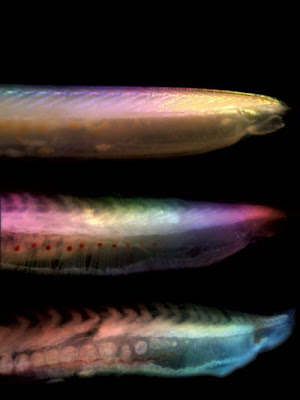 These are three rotting heads. A sequence of images showing how the characteristic features of the body of amphioxus, a close living relative of vertebrates, change during decay. Colors are caused by interference between the experimental equipment and the light illuminating the specimens.

The researchers devised a new method for extracting information from 500 million year old fossils - they studied the way fish decompose to gain a clearer picture of how our ancient fish-like ancestors would have looked. Their results indicate that some of the earliest fossils from our part of the tree of life may have been more complex than has previously been thought.

From the abstract [edit]: The experimental decay of amphioxus and ammocoetes show that loss of chordate characters during decay is non-random: the more phylogenetically informative are the most labile, whereas plesiomorphic characters are decay resistant. The taphonomic loss of synapomorphies and relatively higher preservation potential of chordate plesiomorphies will thus result in bias towards wrongly placing fossils on the chordate stem. Application of these data to Cathaymyrus (Cambrian period of China) and Metaspriggina (Cambrian period of Canada) highlights the difficulties: these fossils cannot be placed reliably in the chordate or vertebrate stem because they could represent the decayed remains of any non-biomineralized, total-group chordate. Preliminary data suggest that this decay filter also affects other groups of organisms and that ‘stem-ward slippage’ may be a widespread but currently unrecognized bias in our understanding of the early evolution of a number of phyla.

Translation: The results show that some of the characteristic anatomical features of early vertebrate fossils have been badly affected by decomposition, and in some cases may have rotted away completely. Knowing how decomposition affected the fossils means our reconstructions of our earliest ancestors will be more scientifically accurate. link