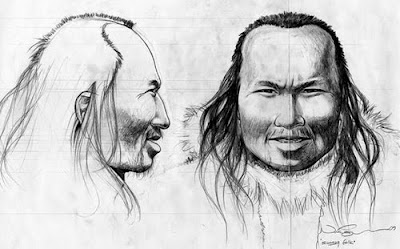 Art by Nuka Godfredtsen; via National Geographic News
From the Editor’s Summary:

“For the first time, the sequence of a near-complete nuclear genome has been obtained from the tissue of an ancient human. It comes from permafrost-preserved hair, about 4,000 years old, of a male palaeo-Eskimo of the Saqqaq culture, the earliest known settlers in Greenland. Functional single-nucleotide polymorphism (SNP) assessment was used to assign possible phenotypic characteristics.

The analysis provides evidence for a migration from Siberia into the New World some 5,500 years ago, independent of the migration that gave rise to the modern Native Americans and Inuit. Elsewhere in the issue we profile the paper's last author Eske Willerslev, who headed the project and found the lock of hair in a Copenhagen museum basement — after a fruitless search among the archaeological sites of Peary Land.”