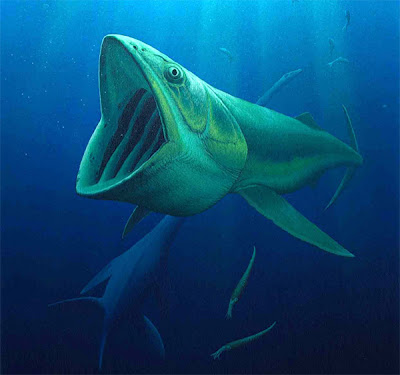 Abstract: Large-bodied suspension feeders (planktivores), which include the most massive animals to have ever lived, are conspicuously absent from Mesozoic marine environments. The only clear representatives of this trophic guild in the Mesozoic have been an enigmatic and apparently short-lived Jurassic group of extinct pachycormid fishes.

Here, we report several new examples of these giant bony fishes from Asia, Europe, and North America. These fossils provide the first detailed anatomical information on this poorly understood clade and extend its range from the lower Middle Jurassic to the end of the Cretaceous, showing that this group persisted for more than 100 million years.

Modern large-bodied, planktivorous vertebrates diversified after the extinction of pachycormids at the Cretaceous-Paleogene boundary, which is consistent with an opportunistic refilling of vacated ecospace.

Read more at the Oxford Science Blog.
Posted by Michael J. Ryan, Ph.D. at 8:37 AM