The Missing Link of Ecological Speciation

Scientists find a population of butterflies that appears to be splitting into 2 species. 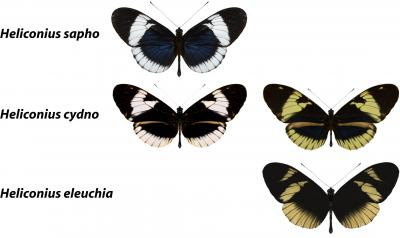 Researchers have investigated the relationship between diverging color patterns in Heliconius butterflies and the long-term divergence of populations into new and distinct species.

Heliconius butterflies display incredible color pattern variation across Central and South America, with closely related species usually sporting different colors. In Costa Rica, for example, the two most closely related species differ in color: One species is white and the other is yellow. In addition, both species display a marked preference to mate with butter-flies of the same color.

The Ecuadorian population examined by Kronforst and his colleagues shows the same white and yellow variation found in Costa Rica but has not yet reached a level of strong reproductive isolation. The entire population lives in close proximity and individuals of both colors come in contact with – and mate with – each other.

But, by studying the Ecuadorian population in captivity, the scientists found the two colors do not mate randomly. Despite the genetic similarity between the groups – white and yellow varieties differ only at the color-determining gene – yellow Ecuadorian individuals show a preference for those of the same color. White male butterflies, most of which are heterozygous at the gene that controls color, show no color preference.

"This subtle difference in mate preference between the color forms in Ecuador may be the first step in a process that could eventually result in two species, as we see in Costa Rica," says Kronforst. link
Posted by Michael J. Ryan, Ph.D. at 2:41 PM