A new transitional sauropodomorph dinosaur from the Early Jurassic of South Africa and the evolution of sauropod feeding and quadrupedalism. 2009. A. Yates, et al. Proc. Royal Soc. B. Published online before print November 11. 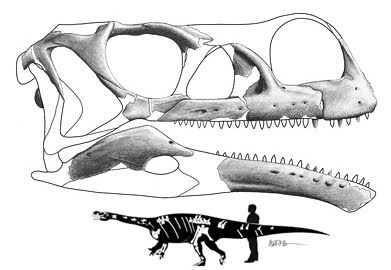 Abstract [edit]: gen. et sp. nov. is described from the upper Elliot Formation (Early Jurassic) of South Africa. It is found to be the sister group of a clade of obligatory quadrupedal sauropodomorphs (Melanorosaurus + Sauropoda) and thus lies at the heart of the basal sauropodomorph–sauropod transition.

The limbs of A. celestae indicate that it retained a habitual bipedal gait although incipient characters associated with the pronation of the manus and the adoption of a quadrupedal gait are evident through geometric morphometric analysis (using thin-plate splines) of the ulna and femur. Cursorial ability appears to have been reduced and the weight bearing axis of the pes shifted to a medial, entaxonic position, falsifying the hypothesis that entaxony evolved in sauropods only after an obligate quadrupedal gait had been adopted.