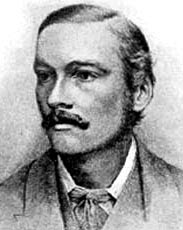 showed the evolutionary connection between vertebrates and certain invertebrates (similar to research being done by Aleksandr Kovalevski).

Balfour proposed the term Chordata for all animals possessing a notochord at some stage in their development. He also did pioneer work on the development of the kidneys and related organs, as well as the spinal nervous system. While convalescing from typhoid fever in Switzerland, he died at the young age of 30 from a fall while attempting an ascent of the unconquered Aiguille Blanche of Mont Blanc. From Today In Science History
Posted by Michael J. Ryan, Ph.D. at 7:16 AM