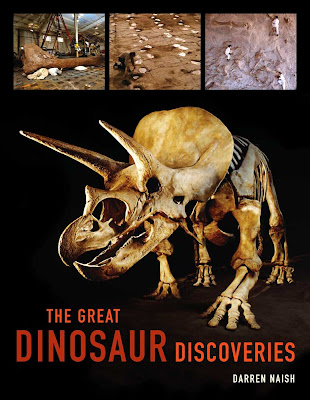 Review: The Great Dinosaur Discoveries is another in the very long line of highly illustrated, general dinosaur books that line the sale walls at your local box mall bookstore. I was prepared to write it off without even looking at it, but once I opened it I was interested enough to read it through to the end (it’s a quick read).

What sets this book ahead of the rest of the pack is its design and layout that groups most items under discussion into well-arranged, double-paged spreads with well written text and well chosen photos or illustrations.

The book divides the dinosaurs under discussion into their various historical eras of discovery, but manages to make the story of Mantell’s description of Iguanodon (1825) as colourful and interesting as that of Eotriceratops (2007). I liked the short appendix listing key figures in dinosaur palaeontology.

This book is designed for anyone interested in dinosaurs but will probably be most favoured by the pre-high school reader who has not already devoured the more dinosaur academic texts. It’s the perfect book to recommend to someone who is looking for a general book on dinosaurs for their kids. I can see myself grabbing this book off the shelf for a quick fact check or an image for a talk.