Kovalevsky (Nov. 7, 1840 – Nov. 9, 1901) was the Russian founder of comparative embryology and experimental histology, who first established that there was a common pattern in the embryological 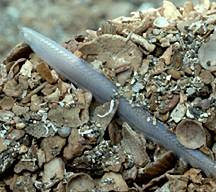 development of all multicellular animals. He studied the lancelet, a 5 cm long fish-shaped sea animal. He then wrote Development of Amphioxus lanceolatus (1865).

In 1866, he then demonstrated the similarity between Amphioxus [=Branchiostoma] and the larval stages of tunicates and established the chordate status of the tunicates.

In 1867, Kovalevsky extended the germ layer concept of Christian Heinrich Pander and Karl Ernst von Baer to include the invertebrates, establishing an important embryologic unity in the animal kingdom. image From Today In Science History
Posted by Michael J. Ryan, Ph.D. at 9:17 AM